In this episode, Dave is in Sebring, Florida for the “Twelve Hours Of Sebring” endurance race. Standing at turn seventeen, the last turn of the track before the cars head down the straightaway in front of the pits, Dave uses his digital audio field recorder to capture the atmosphere of the even through sound.

Zora Arkus-Duntov, the Corvette SS and The 12 Hours of Sebring, 1957

After Zora drove a 1956 Corvette at 150 mph on the sand beach at Daytona Florida, his Chief Engineer, Ed Cole, wanted him to take the Corvette racing. After a fitful first start in the 1956 Sebring 12 Hour race, Zora showed up the following year with the car he really wanted to go racing with, the Corvette SS. Sebring was a race that attracted the world’s best race drivers and the manufacturers who sold their cars based on their racing success. The white test “mule” for the SS was a sensation in practice. Juan Manuel Fangio was faster in it than the previous year’s lap record. As you will see in this video it was also driven in practice by Sterling Moss. The late arriving Corvette SS is also featured with its eventual drivers, John Fitch (Corvette Hall of Fame) and Piero Taruffi. A total lack of testing before the race plagued the SS and led to its early withdrawl. Zora’s plan to race the SS in the Le Mans 24 Hour race that June was dashed when GM agreed to the Automobile Manufacturers Association (AMA) ban on racing.

Welcome to the CorvetteChief.com blog and podcast! Dave’s first episodes are now online. Please browse around the site, check out a few of the episodes and be sure to let Dave know what you think by leaving a comment on any of the posts.

Corvette From The Inside 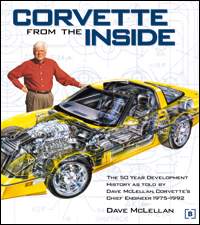 Order your book here for a personalized, autographed copy.
Click Here To Purchase